We started from Longslade Bottom, went across the heath, through Hinchelsea Wood, and back along the edge of Hinchelsea Bog, starting in mist and low cloud, it soon lifted to leave light cloud.

number of Swallows and House Martins were seen flying over the lawns, many more gathered on the power lines.

Not far along the path flowering Water-pepper was spotted growing in the damp ditches.  More wild flowers were seen in the wet areas by the causeway, including seed heads of Marsh Lousewort with a few still in flower.  Alongside these was a heavy cover of non-flowering Marsh St John’s-wort.

Heading up the track to the woods we had a good view of Greenfinch, Chaffinch and Bullfinch feeding on a Rowan tree.  At the top of the hill on the edge of the woods, under the Scots pine there were Holly trees recently coppiced by Commoners to provide young growth for the ponies to eat this winter.  Also in this area Coal Tit and a Goldcrest were glimpsed flitting around the tops of the pines, whilst lower down a Clouded Yellow butterfly flew past.

In the woods there are many ancient pollarded Beech and Holly trees and some very old Oak with their leaves covered in asexual Common Spangle Neuropterus quercusbaccarum and female Silk Button Neuroterus numismalis Galls.  The recent rain had prompted some fungi to start fruiting.  Artist's Bracket Ganoderma applanatum is usually found growing on Beech.

On decaying Beech logs there were many Small Stagshorn Calocera cornea, Turkeytail Trametes versicolor, Hairy Curtain Crust Stereum hirsutum and Common Jellyspot Dacrymyces stillatus.  Further along the path in a tall decaying tree stump boot lace like strands of Honey Fungus Armillaria known as rhizomorpha was spotted.  Then beside the stump, growing on dead wood, a troop of Stump Puffball Lycoperdon pyriforme, an aged specimen of slime mould Fuligo septic and the nest of a solitary wasp.  The damper ground here being covered with tree like Black Haircap moss (Polytrichastrum formosum).

Bypassing a boggy area, we came across two large fungi, thought to be Deer Shield Pluteus cervinus, growing on a substantial den and stockade built from fallen tree branches. Back on the path there were more decaying fallen Beech where we found Southern Bracket Ganoderma austral, masses of Beech Woodwort Hypoxyln fragiforme, Beech Tarcrust Biscogniauxia nummularia and swarms of Beech Jellydisc Neobulgaria pura. 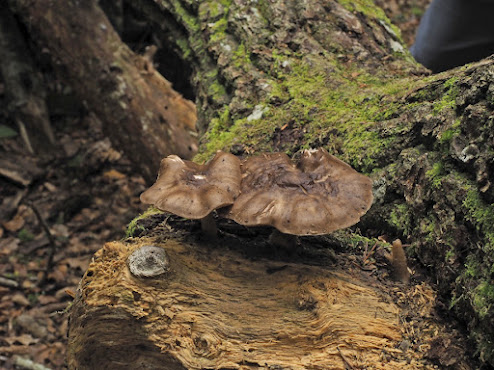 Leaving the woods we crossed the bog where the path was lined with Bog Myrtle and walking back to Longslade along the edge of the bog found the egg sac of a Wasp Spider Argiope bruennichi, also at this spot a couple of people saw a young Adder curled up in the same gorse the sac was in.  It was an interesting sighting to end the walk. A&SS