20 members set off from King’s Hat car park on a cool summer morning. We crossed the road into King’s Hat inclosure, where a number of birds were identified by their song, principally Blackcap. Chiffchaff, Goldcrest and Robin. Coming out of the enclosure onto the heathland at Dibden Bottom, we noted the Heath Moth and Small Heath butterfly, the very alert spotted a resting immature damselfly.  Also Cross-leaved Heath and Bell Heather, Creeping Cinquefoil, Heath Bedstraw, and the clumps of a beautiful Heath Spotted Orchid were on view. Further along Willow Warbler was heard. Round- and Oblong-leaved Sundew were still in bud, but a late Lady’s Smock was still in bloom.


On recrossing the road towards Beaulieu River we saw a Stock Dove, Song Thrush and Skylark. Chaffinch and Wren were heard. By the river were flowering Lesser Spearwort, and Common Cow-wheat. A Curlew and Green Woodpecker were calling. The large yellow bracket fungus on an oak was Chicken-of-the-Woods.
On walking up towards Buck Hill we saw Greenfinches, Linnet, Siskin, and Dartford Warbler and a Grey Heron flew over. Also noted were Common Birdsfoot Trefoil, Heath Speedwell, Marsh Pennywort, Mouse-eared Hawkweed, Bog Asphodel, Lousewort and Eyebright. Brian went off track to see the monument to Samuel Carter, who died riding with hounds in January 1883. When he rejoined the tail of our party they were treated to the sight of a Hobby sweeping over the heath.
By Starpole Pond were Swallow, Blue Tit and Carrion Crow.

We then crossed the Beaulieu River again and returned to the car park, having completed a 4 mile walk.

Andy Broadhurst, who spoke to us last year, has sent details of a forthcoming Swift event. 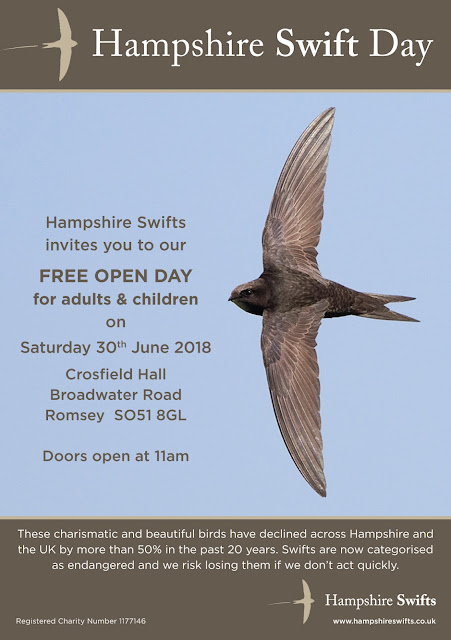 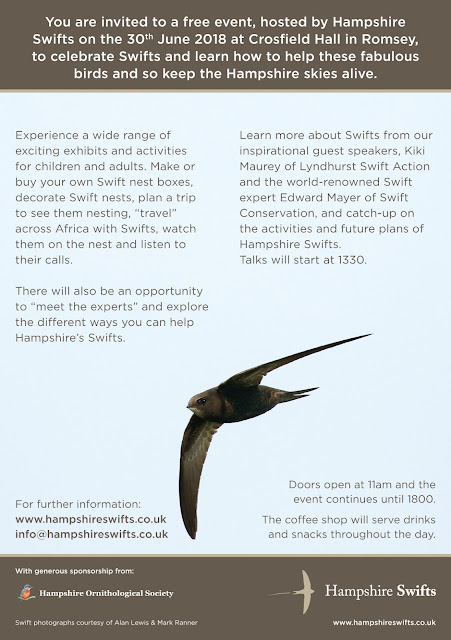 Following our field meeting, Duncan and Richard returned to Martin Down a week later on an overcast day. They found that the numbers of Greater Butterfly Orchids had increased and Marsh Fritillaries and Adonis Blues were on the wing.

A week later, on another dull and rather damp day, Richard went back again and counted over 80 Great Butterfly Orchid flower spikes along Bokerley Bank. Chalk Fragrant Orchids were scattered along the Bank, where Common Spotted Orchids were just coming out. Hawthorn and Cowslip flowers were over, but Horseshoe Vetch, the food plant for Adonis Blue, formed large yellow patches.

At this time of the year Martin Down is well worth a visit!