High water (Hurst Point) 11.20 – Spring tide.
On a lovely morning Duncan welcomed the group of 16 members with a special welcome to two walks newbies, Barbara and John.
Given the state of tide and the presence of a cool south westerly wind, the leader decided that the group would set off along the Ancient Highway to the Lower Pennington Lane car park (to look over the flooded fields) then to Pennington outfall before returning to Keyhaven. Before leaving the car park we were able to enjoy good views of a female Marsh Harrier.

We had a cursory look at the Balancing Pond where there were Teal, Mallard, Shoveler, Gadwall and Coot. On this stretch, a Peregrine in flight crossed the track. In addition, Angela identified two lichens – Oak Moss (Evernia prunastri) and Xanthoria parietina (orange/yellow/green) – sorry no English name. Goat Willow flowers were breaking open, but the nearby Blackthorn bushes were still in very tight bud. Also, in the ‘Efford’ field we saw four Roe Deer including one buck and three Skylarks displaying.
Overlooking the flooded fields we were rewarded with hundreds of Lapwing and Golden Plover which looked stunning with the sun emphasising their colour. A single Ruff was also located.

After a degree of clamouring from the troops, we had our mandatory biscuit stop before setting off for the sea wall and it must be reported that, again, there was a choice of dark and milk chocolate digestives! Chris forewent the biscuits, instead continuing towards the outfall. He returned several minutes later with his reward – an excellent photograph of basking adders.

We had a really close view of a hovering male Kestrel before reaching the seawall where there was a good number of Dunlin and Turnstone. A Spotted Redshank was seen as were two Great Crested Grebes.

On the walk along the seawall there were Reed Buntings, a Rock Pipit and lots of Dark-bellied Brent Geese. Particular worthy of mention are the ‘white’ Ruff on Butts Lagoon, a Chiffchaff, a quartering Marsh Harrier, the pair of Peregrines on the usual stone block, a Spoonbill on Keyhaven Lagoon, the good numbers of Pintail and Shelduck together with another significant flock of Golden Plover.

We arrived back at the carpark at 13.03 and, although, one member made some crack about packed lunches and overnight accommodation being needed for this bird walk, we were privileged to have seen 55 species.


In summary, a most enjoyable walk with good company! (DW)

Ladybirds are pretty and charming creatures but most members knew little more about them until a recent talk by Bryan Pinchen, who has written a reference book on them. There are about fifty species of ladybird in Great Britain, around half of these are tiny, the rest having spots and those were the subject of the presentation. Nearly all of these occur in the New Forest. Bryan began by explaining the life cycle starting with hibernation which is from October. The ladybirds often gather in large groups frequently in exposed sites so they can keep an even temperature to save waking up and getting cold - they can be active above 4°C but need 10°C to look for food. Food and mating are the priorities when they emerge in the spring. The female lays 300/400 eggs spread around: one slide showed a female eating and egg laying simultaneously - multi tasking!  The female dies after egg laying but the male lives on for further mating.

Most species eat aphids, a few mould or vegetation. Aphids are very prolific breeders but the ladybirds do not have it all their own way: some species of ant will milk the aphids for honeydew and perhaps unsurprisingly do their best to protect them from the ladybirds. The eggs hatch in 3-6 weeks. The larvae are about 2mm growing to approximately 5mm. At this stage they are already showing the colours of the adult and are eating 500 aphids per day!

The larvae of the Scarce 7-spot ladybird are rather different, living in the nests of wood ants and eating their pupae and larvae and some aphids which also live in their nests. Far from attacking them the wood ants protect the larvae because they have picked up the distinctive wood ant smell. After 6-8 weeks the larvae pupate, often in exposed places, the pupae display colours to warn would be predators that they do not taste nice. The adults emerge July/August and feed up ahead of hibernation. Good hibernation sites will be used year on year with one generation leaving a scent which attracts next year’s ladybirds to the same spot. Different species are happy to share the same site. The hibernating ladybirds do require a period of cold weather to become sexually mature.

Bryan went on to discuss identification. Ladybirds are beetles and their hardened wing cases meet in a line down the middle of their back,  the wings folding neatly. Some creatures look similar such as leaf beetles (which are related) dung beetles, cockroaches, shield bugs, frog and leaf hoppers even though some of the latter are spotty and black. There are subtle structural differences between all of them and ladybirds. In this country there are only three species which are yellow with black spots and of these the Harlequin Ladybird is the most frequently seen. It arrived in this country in the year 2000 and spread very quickly along with alarm that it would be a threat to our native species since it eats anything - in practice it has not been a problem. Another species which arrived here at the same time was the Bryony Ladybird. It was not regarded as a threat since it is vegetarian; it has not been as successful as the Harlequin. The average garden will support about ten species of ladybird; twenty of the twenty-five species occur in mixed woodland and indeed many in most habitats but less on heathland and in damp areas.


On a bright but blowy morning 16 of us gathered together for the morning’s walk. We progressed down the hill towards the Solent and the beach. In the field to our right were three female Roe Deer. Small birds flitted in and out of the hedge, mostly Blue Tits.

As we reached the beach we could see Wigeon and Brent Geese. On closer inspection we also spotted Curlew, Oystercatcher, Pintail, Turnstone and Dunlin. We paused to admire the Goji Berry plants that grow behind the strandline. Gojis (Lycium barbarum) are an escaped garden plant that was popularly grown for it’s berries. They are tolerant of salt spray, hence they grow all along this walk. It is a member of the Solanum family and it’s flowers (in summer) look like nightshade. The berries are only edible when fully ripe!

We walked further along and up onto the permissive footpath through the trees. There is an abundance of Butcher’s Broom growing here, an indication that there has been little disturbance for a long time. There was an absence of small birds, though there was a tail-less Dunnock, presumably a survivor of an attack by a predator.

When we reached an area of real mud we stopped to have a break. Out on the sea we spotted six Red-breasted Mergansers and (on the islands) Grey Plover. We then retraced our steps.

The rear-guard (Pam and Richard) saw a Merlin and a Raven, but we were too strung out for most of us to see them. As we reached the fields at the bottom of Tanners Lane we were treated to a flock of 20 or 30 Redwing flying from the hedge to the field and back, and Richard spotted a large group of Grey Plover on one of the few islands still visible at high tide.

Back at the cars Duncan investigated a fungus that had been found at the beginning of the walk, and identified it as Bleeding Oak Crust Stereum gausapatum. It gets it’s common name from the fact that if you damage it (ie removing a piece for microscopic examination later) it produces a red substance that looks a bit like blood! CR.

Once again several of our members will be helping Catherine Chatters and Jo to clear Himalayan Balsam from the rivers and streams in our area.

Any help would be greatly appreciated by Catherine and her team.

Her details and further information are as follows:


From the HIWWT web pages:

The New Forest is a crucial area for wildlife but it is threatened by invasive non-native plants. These plants were introduced to UK gardens as ornamentals or as oxygenators in garden ponds but they have 'jumped the garden fence' and invaded the countryside. They grow vigorously, spread rapidly and elbow-out our native wildflowers which provide important food and nectar for invertebrates.
Our ongoing efforts, often supported by volunteers, are helping to control the spread of these vigorous invaders and protect habitats for native plants and wildlife.

Because non-native plants are free from their native predators, they are often able to dominate a landscape with remarkable speed, pushing out the native plants and the invertebrates that depend on them.
With a decline in invertebrates comes a drop in species further up the food chain. Birds, fish and mammals can all be affected by this loss in diversity. Our wildlife depends on a well-balanced ecosystem, free of invasive non-native species.

Please get in touch with Catherine Chatters on 07770 923315 or email Catherine.Chatters@hiwwt.org.uk if you are interested in volunteering. You can see a selection of upcoming work party dates here.
For a full list of work parties to pull Himalayan balsam please contact Catherine Chatters.

Brian has asked us to mention the Winchester Local Group of HIWWT have 2 walks coming up in our area:

Bring lunch. For full details see website (hiwwt.org.uk/whats-on). There is no charge but, as these are fundraising events, there is a suggested donation of £4.00

And until 17 March this is at St. Barbe Museum, Lymington: 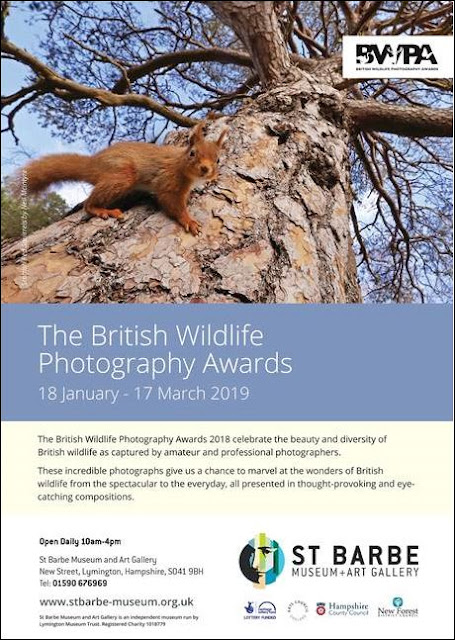 The current exhibition at St Barbes Museum, Lymington are the 2018 The British Wildlife Photography Awards 2018 photographs until 17 March 2019.

“The British Wildlife Photography Awards celebrate the beauty and diversity of British wildlife as captured by amateur and professional photographers. This exhibition presents the winning pictures chosen from thousands of entries and is a showcase for the country’s leading photographers."

This stunning collection comprises around 90 photographs chosen across fifteen categories including coast and marine life, animal behaviour, plants, habitats, the seasons and urban wildlife. There are also categories for film and junior photographers. Each image is accompanied by the photographer’s personal insights into the circumstances and inspiration behind the shot. These incredible photographs give us a chance to marvel at the wonders of British wildlife from the spectacular to the everyday, all presented in thought-provoking and eye-catching compositions.”
Newer Posts Older Posts Home
Subscribe to: Posts (Atom)