After an unusually cold April and some dismal weather in May it was wonderful to have a warm, sunny day with barely a light breeze for the first full Lym Nats’ walk since February 2020!

Twelve, including several new faces, plus a leader met up at Martin Down for a general interest walk, although inevitably at this time of year the emphasis was going to be on butterflies and flowers.  In spite of the late Spring, we were not disappointed. Even the Skylarks were rejoicing on such a beautiful day, for their songs from above were in the background throughout our walk.

Martin Down is a National Nature Reserve that has on its western side the Bokerley Ditch, a long meandering Iron Age earthwork that nowadays marks the Hampshire/Dorset border.  It was along the eastern bank we walked initially, passing scrub where patches of Germander Speedwell matched the blue of the sky and Thyme-leaved Sandwort grew on the ant-hills that dotted the landscape in that part of the down.  Salad Burnet and Cowslips grew everywhere, although the latter were now past their best.  Dropwort, the downland Meadow Sweet, was still quite short and in bud so perhaps easily overlooked for it bore a passing resemblance to Salad Burnet at this stage.

Our first butterflies were Brimstone, Orange-tip, Marsh Fritillary, Brown Argus, Dingy Skipper and Small Copper. We encountered the blue form of female Common Blue before leaving the ditch area to walk across to the flat ‘fields’ of the World War II rifle butts area, where we enjoyed marvellous views of a Green Hairstreak resting on the new growth of Dogwood.  Nearby another Marsh Fritillary also provided perfect opportunities for the photographers in the party.

Patches of Chalk Milkwort grew, with some being pink or white plants in addition to the more usual blue.  Here and there the first flowers of the yellow Common Rock-rose reflected the morning’s sunshine, or perhaps the male Yellowhammers we were seeing during the walk.  It will be a while before Marjoram flowers, but one could smell the herb wherever leaves had been crushed along the path.

One of the hoped-for birds was Corn Bunting and we were not disappointed, although we might have wished for better views. This is one of a number for farmland species, that along with the migratory Turtle Dove, is in decline as a victim of intensive agriculture.  Martin Down supports both species, although today’s walk didn’t visit the area favoured by the doves.

Returning to the ditch we came across our first flowering Common Spotted Orchids and further on a couple of the area’s specialities – Field Fleawort and Burnt Orchid - both calcareous-loving plants with a limited distribution nationally.  The orchids were easy to find as someone had marked them with rings of small stones to prevent walkers inadvertently stepping on them.

Time was running away from us, so we decided to abandon the clock and continued to walk the side of the ditch before looping round to a track that led us by two tumuli, where another unusual plant grew – Pasqueflower (Pasque = paschal = Easter).  This year the flowers had still been showing well just a week ago, but unfortunately were now going over.  This is probably the most south-westerly site for Pasqueflower for its main strongholds are in the Cotswolds and the Chilterns.  Although known to favour ancient earthworks in areas where it occurs, it was only discovered here in 1983 and it is possible that it might have been introduced.

With homage paid to another rarity we headed back towards the car park, finding a number of large puffballs identified by Richard Smith as Mosaic Puffball, several flighty Grizzled Skippers and some 30+ stunted Green-winged Orchids.  The final butterfly, seen by Brian and others, was a Speckled Wood amongst the bushes lining the path near the car park.

As we all had brought picnics we migrated to a sunny slope for lunch, before heading for home or returning to the field.  It was a great start to our season of scheduled walks and thanks everyone for coming.     RC

Legal restrictions on outside gatherings of up to 30 people have been eased.  The Lymnats’ field meeting programme will now resume on Thursday 27th May.  Please refer to the programme which you can also view and download using the link found on the Field Meetings section of our website.

Persons displaying any symptoms of COVID-19 should not attend field meetings. 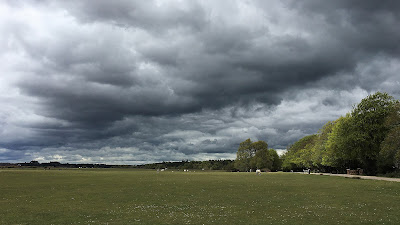 After a short walk along the edge of Ober Heath, we picked up the gravel path leading into the wooded strip lining Ober Water where we watched two Robins possibly preparing for the annual spring rites.

We then crossed the Water and passed through the narrow wood out onto the vastness of Fletchers Green where the fresh green leaves, lit by the sun, on the distant trees stood out against a band of black cloud.
A Song Thrush and Skylark provided a backdrop to the rattle of Stonechats two of which conveniently posed on nearby Hawthorns.

Then Richard spotted on the grass track some yellow Petty Whin, found mainly in Scotland, Wales and surprise, the New Forest.
Once spotted, it suddenly appeared seemingly everywhere along the way.
Further on, a Woodlark happily perched on some nearby heather.
On entering Fletchers Thorn, we found an area of hawthorn,thorny scrub,some very dense, a few scattered birch and oak and a small stream, a sort of Wilding area before Wilding had been invented.
There we saw a Little Egret, Bullfinch, Goldfinch, Longtail Tit, heard the calls of a Blackbird,Chaffinch, Wren, a distant cuckoo and a far off Raven.  Frustratingly we were not au fait with the other calls we could hear.
At the base of a piece of scrub we spotted some Dog Violet.
Leaving the scrub and walking along the middle of Poundhill Heath, we passed a ladder up to a platform in an isolated Pine (possibly for spotting deer?), Richard spotted a large ladybird like beetle with no spots that he subsequently identified as a Red Poplar Leaf Beetle.
By a stand of decaying birch trees, we disturbed a pair of birds in the nearby heather.  Despite them both perching for a brief period before dropping down again, there was nothing distinctive that we were able to see to enable instant recognition.  We are not at all convinced, but like to think that they may have been Meadow Pipits.  Another uncertainty was that we may have also seen a pair of Ravens in the distance or were they Crows.
However, after joining up with the wooded Highland Water, we were pleased to positively see a Mistle Thrush and a Wren down by the water.
Crossing Bolderford Bridge, we went to look at two mysterious solidly built brick structures nearby on the left, one with a very solid elongated iron dome inside.
Richard recalled reading about something like this in the past and poked a round.  It turns out that the structures are the remains of an 1855 hydraulic ram that pumped water for New park Farm.
From what I later could work out, it is a type of pump that has just two moving parts and powered itself.
Water was fed from the river which alternately operated one of two valves, the dome being the required pressure vessel.  The pressure vessel did the pumping,  Clever Victorians.
So, intrigued at the time, we returned to the car park, deviating to see if Ober Water was shallow enough to ford, it wasn't, but we did see a large yellow triple mushroom shaped fungus on a birch, as yet unidentified.  The plan B route back was via the campsite entrance and along Ober Water and retracing our steps.
JE

Brian was joined by Chris and Diane for a walk that lasted all of three hours. There was a light northerly breeze taking the edge off the temperature on an otherwise bright, sunny morning that became increasingly overcast as we set off from the car park in Ridgeway Lane. The route taken was a rough figure-of-eight, starting in the formality of Woodside Gardens, into Woodside Park, onto Normandy Marsh via Woodside Lane and Maiden Lane, then Normandy Lane via The Pinckney Path, Maiden Lane, Poles Lane and back into Woodside Park and our starting point.

In Woodside Gardens we noticed that two "Monkey Puzzle" trees have been planted to replace the one that had to be felled last year.

We re-visited the Green-winged Orchids in Woodside Lane that were now putting on a spectacular show with c100 flower spikes.

In Maiden Lane Diane glimpsed the only butterfly that we saw all morning - a Speckled Wood - but various bumblebees and other flying insects were active.

The water level in Normandy Lagoon was very low but there was plenty of activity amongst the Avocets, Little Terns and Common Terns which will all, hopefully, breed successfully this year. An Oystercatcher may also have been on eggs and the Redshanks were actively "courting".

Also in their summer plumage were Dunlin and a solitary Grey Plover. The arrival of a Raven caused much agitation amongst the Lapwings.

Probably the highlight of the morning came when two male and one female Eider appeared close offshore in the vicinity of Aden Bank with much diving and posturing.

We were joined there by a group led by Graham Giddens and Chris was able to alert them to the Spotted Redshank that was transitioning into its breeding plumage which we had just been watching in the nearby channel.

Near the yacht haven we could hear Reed Warblers and had an excellent view of a singing Whitethroat.

Returning along Normandy Lane we saw four Roe Deer,  a male Bullfinch and a Green Woodpecker and then saw a male and female Blackcap and Chiffchaff in Maiden Lane..

One oak sapling was plagued with at least two galls  courtesy of the larvae of gall wasps.

There were birds, flowers and foliage aplenty and the weather forecast for the Bank Holiday weekend is "Oak before Ash, we're in for a splash" if you want to see these sights for yourself.