Due to the adverse weather forecasts for later this week we have reluctantly decided to cancel Angela's walk at Deerleap on Thursday.

Eddie Wiseman has just had his excellent book on 'our' marshes published by Dan and Rosie Powell, who did the delightful illustrations used throughout the book as well as using photos by many local photographers. It is a 192 page journey through the history of the birds and birdwatchers of our 'patch' 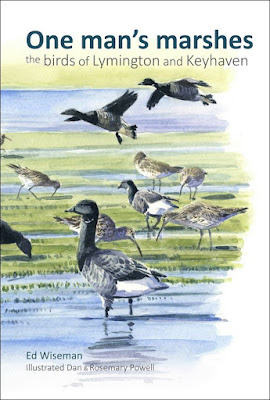 I tried to get it at Waterstone's in Lymington, who told me that it didn't exist! So I ended up getting it directly from Dan and Rosie at http://www.powellwildlifeart.com for £14.99.

Sandra has warned that the going will be very wet and muddy on Thursday.  She recommends wellies, though good stout walking boots might be okay, and a stick to help with balance.

And don't forget this evening we have a selection on Manuel Hinge's films starting at 7:15 in the McLellan Hall at The Lymington Centre.Visitors are always welcome for a small charge (adults £5, juniors £1)


Only 3 intrepid LymNats joined Brian on a cold, sunny morning with a strong north-easterly wind for a walk from Maiden Lane to Lymington Marina. Whilst the main focus was on Normandy Marsh, mudflats and shingle banks were still partially exposed offshore with LW having been at 06.50 (0.62m) and HW due at 13.15 (3.24m).

Hampshire County Council began purchasing the coastal grazing marshes between Lymington and Keyhaven in 1973 with the acquisition of Normandy Farm. This far-sighted policy was a response to the rapid pace of development which had occurred on the Hampshire coast over the previous decades. It was felt that the only way to safeguard this beautiful section of coastline for future generations was to bring it in to public ownership.

Normandy Lagoon was the product of the excavation of material used in the construction of the new seawall in the early 1990s, since when the number of visitors to the Lymington-Keyhaven Reserves (HCC and HIWWT) has steadily increased with around a quarter of a million visits recorded each year. Sunday's walk encountered many of these visitors -  fellow birders, buggies, bikes, dog-walkers, joggers and ramblers. At times there seemed to be almost as many people (not LymNats, obviously!) on the seawall as there were birds on Normandy Lagoon.
SELECTED SIGHTINGS
Eight Acre Pond: Coot, Little Grebe, Mallard ♂♀.
Four Acre Pond: Dunlin, Lapwing, Turnstone, Oystercatcher, Dark-bellied Brent Goose, Black-headed Gull, Redshank.
Normandy Marsh/Lagoon: Pintail, Teal, Wigeon, Red-breasted Merganser, Shoveler (All ♂♀), Great Black-backed Gull, Little Egret, Ringed Plover, Greenshank, Black-tailed Godwit, Curlew, Starling, Avocet (15+ - 2 actively feeding, the remainder resting), Mute Swan, Canada Goose, Cormorant, Dartford Warbler (♂), Wren. One Little Egret was seen with yellow leg rings.

Oxey Lake/Aden Bank: Goldeneye (3♀), Great Crested Grebe and Slavonian Grebe (2). The latter were at first difficult to identify but remained resting on the surface for some time and were viewed from several different angles - a Great Crested Grebe obligingly appeared and dived in their immediate vicinity for comparison. BM.


We had a lovely sunny morning with a high tide and a gentle northerly wind for our group of 14.


The species highlight of the morning for many of the group was a female Bearded Tit feeding in the reeds in Butts Lagoon and skillfully spotted by Chris. Although it was quite windy by then and there was a lot of movement in the vegetation, the bird stayed fairly static feeding on a seed head which enabled us all to have good long views through the telescopes.


Another species that we don’t often see was Ruff, with four individuals on the marsh to the north of the Old Tip, a couple of them with very white collar plumage which may have been the early stages of the spectacular male breeding ‘ruff’.


Our total of 47 bird species was reasonable but more notable was the number of individual birds in some of the flocks. The Lapwing were particularly skittish, taking to the air in great numbers several times at different stages of the morning. Sometimes they were accompanied by hundreds of Golden Plover seen at their best when the sun was on them as they turned and whirled high in the sky.


Flying lower, keeping just above the water out towards the Solent, was a ‘fling’ of Dunlin – smaller birds than the plovers but equally impressive with their ever-changing aerial display recalling a murmuration of Starlings! The reason for this disturbance was obvious when a Peregrine Falcon flew past us heading back towards the land, but we couldn’t see whether it had caught one of the smaller birds. MF
photographs © Richard Coomber