A reminder that Lymington & District Naturalists' Society have a stand at this event and several members of our committee will be attending - come and visit us! 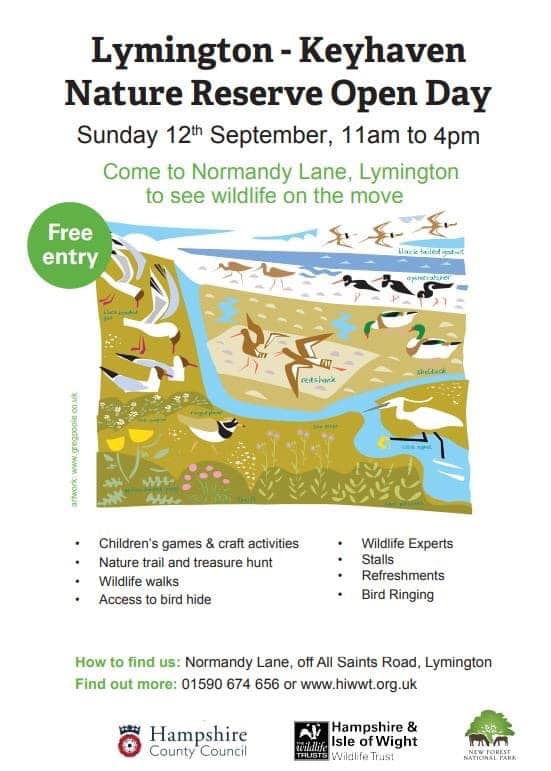 On this warm but overcast morning 18 members with Pam as leader gathered at the side of Cadman’s Pool.  Feeding on the pool side were a flock of Chaffinches, and a mixed flock of Coal Tits and Blue Tits and on the water were Mallard, a solitary Canada Goose and a couple of juvenile Moorhens.

From the pool we set off along the concrete remains of the old airfield across the heath towards Holly Hatch Inclosure. Here we found all 3 types of heather consisting mainly of Ling, with some Bell Heather and small patches of Cross-leaved Heath. Along the track sides Cat’s Ear, Lousewort, Eyebright and Milkwort were in flower as well as a small area of Wood Sage.

To the right of the track lies a small boggy pond where we found Marsh St. John’s-wort which was in flower, Marsh Pennywort, Round-leaved Sundew and the erect seed heads of Bog Asphodel. Looking across to the inclosure there was a glimpse of a Green Woodpecker and we heard the distant call of a Buzzard. Further on we had a good view of a male Redstart and a Roe buck with one antler and all around we could hear and occasionally see Stonechats.

On entering Holly Hatch inclosure deer fencing provided protection for young Silver Birch, various conifers and offered plenty of undergrowth for wildlife. Chiffchaff, Redstart and Blue Tits were seen.  On the grassy track sides fungi were present, waxcaps, puff balls and bolete (species not identified). Also, Bilberry, Wood Sorrel and Wood Spurge were present. Then following a wet path downhill through the mature woods, we came to a wider track where we saw a single Speckled Wood Butterfly. In the damp areas Hard Ferns with normal and reproductive fronds were growing.
Eventually we came to Holly Hatch cottage and the open lawn where cattle and ponies were grazing. Here there are views across Rakes Drake Bottom and in the distance Sloden Inclosure. Every year House Martins nest under the eaves of this cottage and we were not disappointed as they swooped around and fed their young.
A Grey Wagtail was spotted on the roof of an outhouse and in and around the stream that runs through the valley, flowers of Tubular Water-dropwort, Lesser Spearwort, and Greater Bird’s- foot-trefoil were seen together with Water Plantain in seed.

Finally, we walked along the inclosure’s edge, with the stream to our left and mature Oak and Beech to our right.  On a large Silver Birch several twisted bundles of twigs matted together were seen. These are known as witches brooms, they can be caused by bacterial, fungal or viral infections of the lateral buds. These bundles do not harm the tree. Then, whilst watching a family of Nuthatches, a female Blackcap was spotted and further on a Wren, Robin, Song Thrush and Blackbird were seen.

Eventually we returned to the heath again. As we walked uphill, we found the small pink flowers of Lesser Skullcap and further on Devil’s-bit Scabious, before we finally came back to the car park.
PP
Photos:  ©  S Skarstein and C Robinson
GPX

Leading his first Thursday group walk for nearly 2 years, Brian was joined by over 20 LymNats. Although "Birds" was the advertised subject, the walk began in the "wilds" of Woodside Gardens where wild flowers and insects dominated. The group spent over an hour independently exploring the delights of one of Lymington's hidden jewels.

From Woodside we proceeded to do a circuit of Normandy Marsh to deliver the advertised walk.

We saw immature Shelduck which would have followed their parents to the lagoon immediately after hatching. The nest would have been a down-lined cup in a burrow or hollow tree (as seen on "Springwatch"). There was also a juvenile Avocet, still with some dark brown where the adult is black.

The number of white foreheads of the juveniles amongst the black caps of the adults was evidence that the Common Terns had a successful breeding season. A group of 30+ birds periodically took to the air from a spit, with their harsh key-arr and kirri-kirri calls, and then landed back in an orderly fashion, all facing front.

When an imperious Great Black-backed Gull took flight, it was instantly mobbed by Common Terns and Black-headed Gulls - they clearly recognised a predator that would probably have accounted for some of their young.

Little Egret "JN" was showing well out on the marsh. Ringed as a chick by Graham Giddens in the summer of 2006, "JN" is recognised by the BTO as holding the longevity record of this species (I reported today's sighting to GG).

A very keen young ornithologist pointed out a young bird that was eventually identified as a Redshank, possibly the sole survivor of a late (July) brood, whose siblings may have been predated by the GB-bG.

From the seawall it was possible to see a variety of coastal and saltmarsh plants: Glasswort, Common Sea-lavender, Sea Purslane, Rock Samphire, Golden Samphire and Common Cord-grass (Spartina anglica).