9 Feb Talk: Fisheries Conservation - What can we do?

Our next members’ Zoom talk will be given by Stephen Akester.  Stephen is a fisheries management specialist who has travelled widely to develop projects that encourage sustainable aquatic ecosystems.

The 'New Forest Awakening' Festival - all through February

As the Forest begins to awaken for Spring, Lymington Naturalists’ Society are delighted to announce that, together with other community groups, we will be partnering with the NFNPA (New Forest National Park Authority) for their upcoming ‘New Forest Awakening’ festival which will be taking place online throughout February

Starting Monday 1st February, there will be a varied programme of virtual tours, podcasts, soundscapes, talks and films to enable people to discover why the New Forest is so special and its role in the climate and nature emergencies as well as explaining what people are already doing to protect the Forest and how everyone can help.

More information about this festival and a programme of online events can be seen by following this link:

You will notice fewer of our popular ‘ghost’ walk reports on the blog in the coming weeks as we all endeavour to comply with current lockdown regulations by staying local and staying safe.  Members are continuing to post their lockdown photos and sightings on our Members only Facebook page.

Our local coastline, beginning from Milford-on-Sea, encompassing Keyhaven and Pennington Marshes and extending up the Lymington River, is designated as part of the New Forest National Park. It faces significant challenges now and in the future from flooding and from erosion

The Environment Agency is investigating the challenges and is exploring ways in which a sustainable future for this fragile landscape might be ensured and funded.  To find out more about the challenges and possibilities or to sign up for updates on this project or to have your say on it, go to their information webpage:

Our next members’ Zoom talk will be given by Chris Chapleo, the chair of the Christchurch Harbour Ornithological Group (CHOG).  Chris will be showing us some of the rich variety of bird life that is to be found in the harbour and the lower Avon Valley. 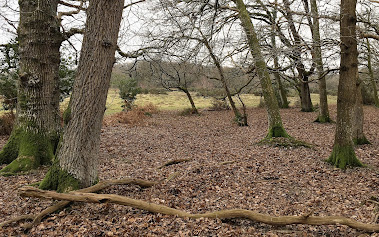 The walk started well down a wide grassy fire break through mixed woods and then Richard Smith and I were then confronted with an extensive waterlogged and well trodden section  While circumnavigating the section, a song thrush was glimpsed and a little later a redwing.

Turning right, we shortly passed through the gate of the plantation into a mainly open area running along the south side of the plantation, scattered with groups of trees, bushes and the odd flowering gorse.
We then went through a small copse of mainly oak and some holly where we heard the faint sound of a wood pecker (great?) tapping to find food. It was then seen at a distance flying to a perch   Leaving. we passed one of the holly trees showing large teeth marks, surprisingly above head height (ponies?) .
On the south facing bank of the ditch running along the edge of the plantation were several ant hills, one particularly magnificent.
More evidence of ants, this time a very large concentration of small mounds, the work of meadow ants, surmounted with various grasses.  Not that we looked at the time, but the South East face of the mound is meant to be flatter in order to catch the morning sun.
In a small holly, another glimpse, an uncooperative goldcrest.
Another change of vegetation, this time an extensive area of clumps of small thorny scrub.
Eventually, we turned up the side of the plantation through a mix of beech one side and very tall pine on the other in order to join a forest track back into the plantation.
Along the track a jay was seen and later a tree creeper, but not for long.  Turning off the track up a series of firebreaks through a variety of groups of trees, I managed to take a wrong turning and ended up having to get round the muddy section again.  Not exactly the planned sylvan walk.
However, there was a reward at the end, one possibly two very cooperative nuthatches in the carpark.

Diane and I set off from the (newly charging) car park at the Keyhaven end of the sea wall. We were greeted by the Marsh Harrier landing on its preferred bush on Avon Water. On the harbour side of the sea wall the tide was very low, exposing large amounts of mud and seaweed. This was reflected in the numbers of Dunlin and Turnstones feeding just below us.

On the harbour water the Brent geese (40–50) couldn’t seem to make up their minds whether to walk or swim in the shallow water. 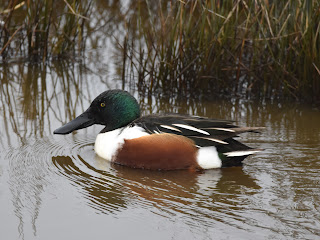 As we walked round towards Keyhaven Lagoon there were Curlews both sides of the wall, more Dunlin, Oystercatchers and Redshanks, Little Egrets and Shellducks. On the lagoon itself there were more of the same with added Wigeon, Shovellers, Black-headed gulls, Canada geese, Coots, Teal and Pintails. On the footpath there was an obliging pair of Stonechats. 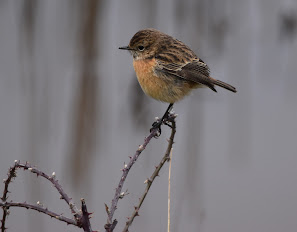 On Fishtail there were all the forementioned species plus one Snipe!

On Butts there were two ‘rafts’ of Black-headed gulls for no very obvious reason. Each group consisted of 20-30 birds, in close order. The rest of the water was empty! Three Reed Buntings were feeding on seed heads amongst the reeds.

On the mud there were two Ringed plovers and several Grey plovers amongst the other waders. 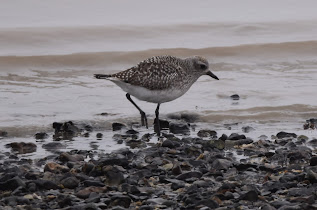 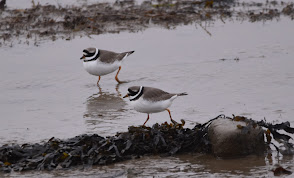 
The flooded fields were frozen as we walked down towards the car park at Lower Pennington, the only birds on them was a pair of ice-skating Pied wagtails.

Down the ancient highway we saw mainly Robins (there seem to be more than usual around at the moment), Blackbirds and Canada geese.

Back at the Keyhaven car park we took one last look over Avon water. The Marsh harrier was just where we had left it, but a Kingfisher was present along with a couple of Little grebes.

Spring is on its way.  The days are lengthening, Spring flowers can be seen in sheltered parts of the garden and bird behaviour is already changing around us.

The first illustrated talk in our Spring programme of Zoom meetings will be given at 7.15 on Tuesday 12 January by Louis Rumis and will take us to northern Greece and to Lake Kerkini, one of the most important wetland sites in Europe.  All members are welcome to attend.

Selected highlights were: 3 Spotted Redshank on Salterns Lagoon; a "Peregine on a post" offshore; 10 Avocet, 2M + 4F Goldeneye, a "number" of Snipe and a Kingfisher (all on Normandy). Simply trying to count the roosting/resting Avocet, the perpetually diving Goldeneye and the cryptically camouflaged Snipe gave some insight into the difficulty of conducting the WeBS count (Wetland Bird Survey). The walk concluded around midday.
P.S. Brian got to walk further than Richard when he realized that he had parted company with the baseball cap that he had been wearing on top of his balaclava and had to retrace his steps around Oxey Marsh to retrieve it.
GPX
Newer Posts Older Posts Home
Subscribe to: Posts (Atom)