This week's talk: 28th September 2021 AGM (15 minutes) followed by "The Return of the Bustard" by David Waters

Tuesday 28th September sees our first talk of the Winter 2021/22 season taking place in our new venue - St. Thomas' Church Hall, Lymington, which will be preceded by a short AGM. Doors open at 7 p.m.

"The Return of the Bustard"

David Waters of The Great Bustard Group will explain their efforts to reintroduce this remarkable bird!

Note: We respectfully ask that attendees wear masks at our indoor meetings.

Our next meeting will also be in St. Thomas' Church Hall on 12th October when the subject will be "Marine Mammals and Recent Discoveries" by Anna Bunney from ORCA.

A lovely misty morning among the great oaks, Beeches and conifers though it wasn’t long before the sun burst through the canopy.

We started with a glimpse of a Great Spotted Woodpecker and heard Robin, Coal Tit and Jay in the trees around us. The grassy rides were carpeted in delicate dew covered cobwebs, each with a small spider at its centre.

A few butterflies, Red Admiral and Speckled Wood, emerged to dance in the pools of sunlight before we deviated briefly into a clearing in search of slime moulds. We found just old remains of a yellow Dog’s Vomit Slime Mould but came across a good display of a coral fungus, .Ramaria stricta

We found another good fungal specimen at the base of a beech tree, Cauliflower Fungus, and several Violet Door Beetles before we emerged from the wood and followed the wood margin up the hill.

A damp drainage ditch encouraged dragonfly, moss and sundew and several Southern Wood Ant mounds were dotted up the line. Looking out across the Gorse and heather a distant raptor was probably a large female Sparrowhawk being mobbed by crows, for generally Corvids avoid Goshawks like the plague. Much nearer was a family of Stonechat. An attractive moth, a Silver Y, settled on the bracken by the path and we found Oyster Mushrooms, King Alfreds Cakes, and heard Nuthatch and Long-tailed Tits.

Diving back into the wood we headed back, finding Green Elf Cup, several Russula mushrooms, an immature Beefsteak Fungus that resembled a slime mould, heard Ravens croaking nearby and saw a fascinating collection of more Violet Door Beetles working through a patch of dung.

Back in the car park a wonderful specimen of a Goat Moth caterpillar was found. I hope everyone enjoyed a lovely morning in the woods despite not finding many birds and, in particular, the promised array of exotic species such as Crossbill and Dartford Warbler. Glad I didn’t mention the Wildebeest! RP 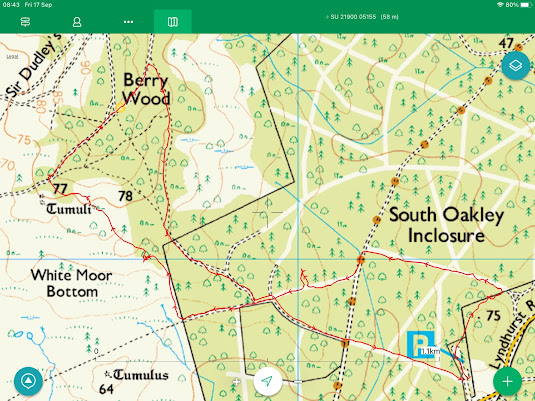 On a grey, still morning, twenty-seven members gathered in Matley car park to explore the wood and surrounding area. We paused briefly in the campsite where a few bird feeders hung in the trees before branching north into the Ancient and Ornamental Woodland of Matley Wood.  This term refers to areas of the forest containing a mixture of native trees and bushes, largely natural and unchanged, that are not subject to statutory inclosure. (1).  We passed Oak, Holly, Small-leafed Lime, Yew, Sweet Chestnut, Crab Apple and Rowan.   Signs of Autumn appeared as we noted the Holly, Crab and Rowan were all filled with fruit, the Rowan already being plundered by Blackbirds.

Emerging from the wood we followed a sand and gravel track over the heath towards a footbridge on the Beaulieu River. A series of parallel ridges in the heath suggest possible earlier ploughing activity - several areas of the forest were ploughed for food production during the Second World War.  We found several large fragments of metal shrapnel amongst the furrows, evidence of extensive wartime training activities in this area during both world wars (1).

Amongst the different species of heather that were in full flower, we noted Dwarf Gorse, Devilsbit Scabious, Harebell, Marsh Clubmoss, and Sundew; the latter two giving a clue as to how wet this area can be.

Amongst the heather, Small White and Grayling butterflies were observed, the latter being well camouflaged and reluctant to fly.
A Fox Moth caterpillar was found on the heath.  There were also patches of a tiny red-capped lichen, Cladonia floerkeana.
Coral Necklace Illecebrum verticilatum was growing in a small dried out, dusty depression beside the track, soon to be waterlogged again.

Approaching the tree line beside the Beaulieu River, we paused to watch Spotted Flycatchers darting out from the trees to capture insects. We moved along the bank of the river, visiting areas that have been heavily poached by cattle.  On the river bank, Water Forgetmenot, Water Mint, Water-pepper and Lesser Water-plantain were all seen and a Raven flew overhead.

Marge pointed out a cylindrical white Green Woodpecker dropping and later examination showed numerous ant exoskeletons within.
Chamomile was growing in small clumps   close by the second river bridge as well as a   good stand of Nodding Bur-marigold.  This   boggy area is normally busy with dragonfly,   but was quiet on this day.

Stopping for a break at the hill fortification just to the South of Home Farm proved fortuitous. The Alder, and Willow trees along the river bank and the surrounding lawn were busy with numerous Spotted Flycatcher, Redstart and either Chiffchaff or Willow Warbler - we could not agree on the latter! A group of Woodlark appeared, a flock of House Martin and a few Swallow circled high over the trees and a distant Buzzard was seen.

Walking back towards Matley, we enjoyed the view from the top of one of three ancient barrows (3).  The eroded sandy path back to the woods has left a bank suited to the Bee Wolf which have have excavated several tunnels with characteristic “D” shaped entrances.  A few were found on the path and in the cooler temperature were relatively docile and could be examined closely.

Returning to the northern edge of the wood we skirted around the wooded perimeter and then back to the car park, noting some fungi and some green stained wood, evidence of Green Elf-cup, Chloriciboria aeruginascens, on the way.

An interesting drone survey of the area along with more information can be viewed here:   https://youtu.be/csoqTK1E3kM