Walking up the cycle track which runs between Ladycross and Denny Lodge on 28th December we came upon a rather splendid collection of mosses and lichens on a log by the side of the path. One of the lichens in particular caught our eyes - a thalloid lichen with prominent apothecia (the fruiting bodies). 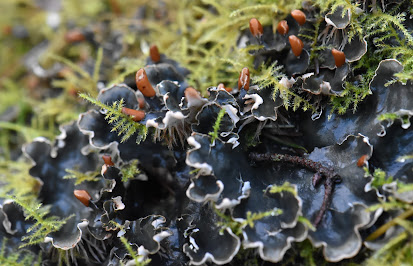 I believe that this is Peltigera hymenina, one of the so-called ‘dog’ lichens. The common name refers to the rhizinae (their anchorage of choice) supposedly looking like dog’s teeth. This led to them being considered a cure for rabies (good luck with that if you get bitten by a mad dog!) 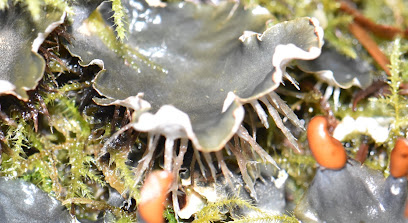 It also turns out that various Peltigera sp. cause problems in lawns! There are several documents on Google about how to rid your lawns of them if you suffer from this problem.

P. hymenina is supposedly common and widespread, but I had only come across it in field guides up until now.

On this same log were several other lichens (including Cladonia digitata), lots of mosses and a single Scots pine seedling. 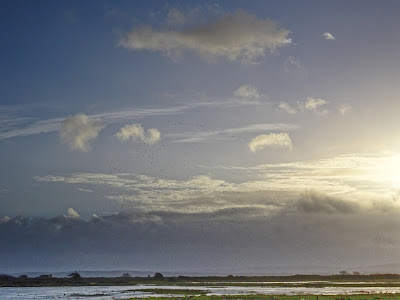 On the day of the New Moon Richard Smith met Brian in Maiden Lane at 08.30 for an unscheduled pre-Christmas 4 hour walk around Lymington-Keyhaven Nature Reserve following an anti-clockwise route. The conditions at the start were very benign with sunshine and light winds, interrupted by the occasional light shower. The wind steadily increased throughout the morning and the skies became more menacing. The tide was very high and there was a lot of standing water resulting from the recent rain which filled the lagoons and flooded the fields. None of this bothered the birds however which were everywhere in large numbers. We set off along the footpath to Lower Pennington Lane and our first sighting of note was of 8 Barnacle Geese in the fields behind Oxey Barn. It was good to see quite a number of juveniles amongst the Dark-bellied Brent Geese which were grazing the same fields.

Next came a large flock of Golden Plover and 2 Ruff on Pennington Marsh, one of which was very active and doing a passable impression of a snowman/bird! All of the usual suspects were on Fishtail but the Pintail (M) get the award for the snappiest dressers. We turned back from the junction of Keyhaven and Fishtail Lagoons and continued via Butts, Jetty and Pennington Lagoons, Oxey Marsh, Salterns Marsh and 8 Acre Pond to the undoubted highlight, Normandy Marsh. Because of the state of the tide birds were crammed into the lagoons and its islands.

Sandra, Marge & Marlene Covid-bubbled round this 2.5miles circuit on a sunny morning cooled by a stiff breeze. From opposite the Lamb Inn we stumbled through trees at the back of the Green to the path along the back fence of the old forest cottage. During a diversion along the side fence to see Sulphur Tuft (Hypholoma fasciculare) perched on fallen logs, we were pestered by a large, grey horse that crept up behind us with evil intent; leaning over the paddock wire it sank its teeth into anorak and rucksack, luckily well padded.

Somewhat chewed, we made a hasty exit down the path through mixed woodland, tramping in thick, leafy layers below spindly birch and large beech, now almost bare, though oak was hanging on to rich-brown leaves. The little gully we crossed was in modest flow after recent rain that had benefited the bright, feathery tufts of Hard Fern (Blechnum spicant) overhanging the bank.

Just short of the parking area we turned south-east onto the old Church Path. Heading steadily downhill, ignoring any side paths, we reached a bog, dry-ish in summer but now very wet.  Apart from some clumps of black and grey Candlesnuff (Xyaria hypoxylon) on mossy mounds, the only creature of note was a large golden retriever, revelling in traipsing through the mud up to its belly, clearly on borrowed time pending the arrival of the owner.


Beside the path are some notable trees including a bulbous oak and con-joined beech and oak forever intertwined. A few yards along the road brought us to St. Peter’s at Bramshaw. A church on this site dates from Anglo-Saxon times but the current building has 3 main periods of construction: 13th. 15th. and 19th centuries and was partly in Wiltshire until the 1890s when the boundary was shifted. There are splendid rural views from the church mound and an extensive graveyard around and behind. The back stile leads into a meadow; currently cut to rough pasture, but where long grasses and buttercups grow in summer, providing hay for the winter. Following the path from the bottom left-hand gate we then swung north to reach the Newbridge road, passing a mysterious arrangement of 3 huge, cut trunks of oak with no sign nearby of their basal stump. We turned towards the Bramshaw road then cut the corner as far as the cattle grid for the final uphill stretch from Woodside Bottom to the Lamb. 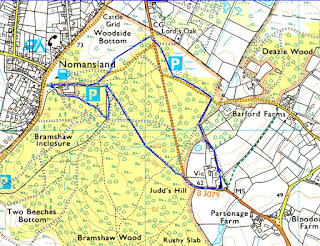 On a misty morning Richard Smith, Diane and I set off from Bolderwood car park to look for winter thrushes.

We walked past the Deer Sanctuary (no deer or birds to be seen) and continued on the path downhill. It didn’t seem very promising as all we saw at first were robins, dunnocks and blackbirds but as we got further on there was movement above and around us. Long-tailed, great and blue tits, treecreeper, nuthatches and goldcrests were constantly on the move in the trees giving us good, if fleeting, views. 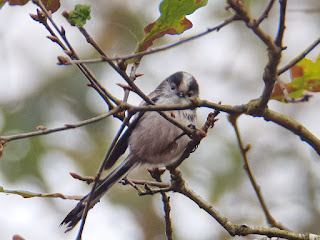 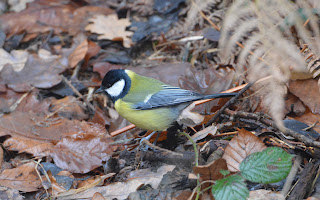 The shortcut that we usually take on this part of the walk was so squelchy that we stayed on the hard path until it met the cycle path at a T-junction, where we turned right to head up to the holly plantation.  The birds were more obliging here with nuthatches feeding on the path and a goldcrest moving about in the bracken. 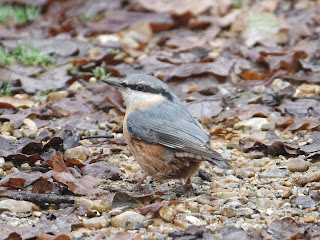 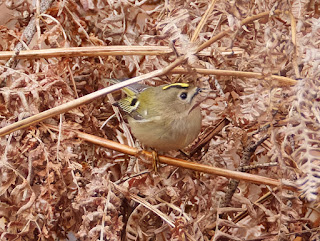 Goldcrest - RS
As we proceeded uphill through the holly we became aware of the (mainly) redwings feeding on berries and chattering to each other. A green woodpecker called, very close by, though we couldn’t see it. We did see a song thrush on the ground and had a close view of a raven cronking as it flew over our heads. The fieldfares proved elusive – we only saw them in flight, but one redwing obligingly sat in a nearby tree delicately plucking the berries. 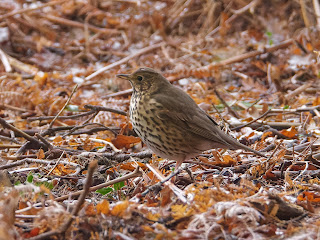 Song Thrush - RS
There were a few chaffinches about but no bramblings that we could see, though the birds only had to be a few yards away to disappear in the mist.
We made our way back to the car park for a warm drink. A shortish walk but a productive one. 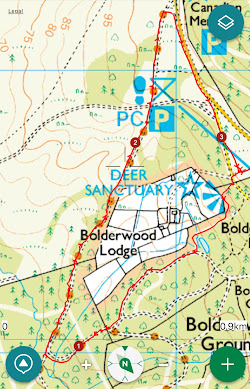 We arranged to meet Richard Smith a couple of days early for our walk, due to the poor forecast for Thursdays weather . Meeting up at Setley Pond in early morning sunshine we immediately saw the grey heron, as Setley is known for its long standing heronry. Walking towards the A337 on first the heath and then through narrow paths we noted fresh rabbit holes, a field of crows and a pair of probably goldfinches flying swiftly away.

After crossing the main road, we walked along the ancient path, with its wide variety of ferns. There was a recently dug hole in the bank, with a very small hole - see photo, we thought possibly a bank vole. We carried on along this path up to Royden woods. There were many varieties of fungi to be spotted - we noted earth-balls, candle snuff, and blushing bracket. Through a small Copse we saw both great and long tail tits.
We then joined the track through the woods and we heard a nuthatch, and when sitting down for biscuits Richard spotted a coal tit.

The forestry people were hard at work felling trees and making log piles as we headed back to the main road, and we did a slight detour around. The weather was glorious, and after crossing the road we then made our way back to the car park across the Heath, there were very few birds, but plenty of ponies and we did see one stonechat.
We looked forward to when we can meet up as a group to have the depth of knowledge of collective membership. A very pleasant walk. 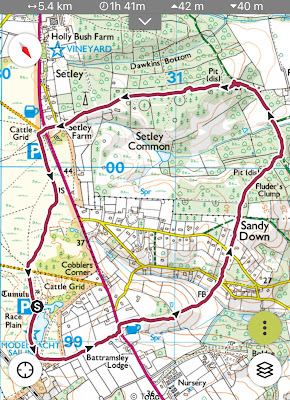