It was a very blustery and non-too-warm walk from Keyhaven around and back via the Ancient Highway. There were occasional showers (with hail). The high winds seemed not to the liking of the small birds as we saw virtually none.

In the car park we heard a Cetti’s Warbler and saw fly-over flocks of Black-tailed Godwits and Turnstones. On Avon Water there were two Little Grebes. 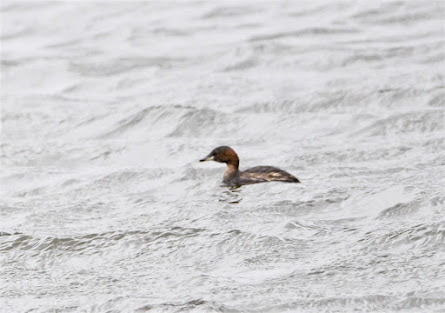 As we walked along the seawall we saw a few waders (Oystercatcher, Grey Plover, Curlew and Little Egret) but in single figure numbers. A pair of Ravens flew past us and a solitary Wheatear was on the path.

Keyhaven Lagoon was bird free! I don’t think I have ever seen so few birds on it, the water level was up due to recent rains.

Things looked up (marginally) on Fishtail. Canada Geese dominated but winter ducks were there, mostly in eclipse plumage. Wigeon, Teal, Gadwall, Mallard and Shoveler. There were few waders, one Lapwing, at least four Greenshanks and two Snipe. There were two Rock Pipits on the path, keeping their distance. 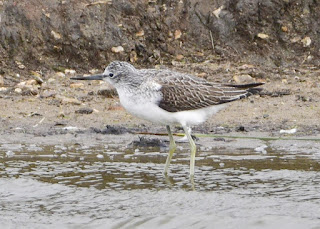 Greenshank © Chris Robinson
When we got to Butts the wind had got up even more so, after a brief scan of the Canada Geese and Eiders (on the seaward side), we cut back up the first path to seek some shelter. Near the gate onto the Ancient Highway we were treated to a mini-murmuration of Starlings amongst the cattle with Swallows and the odd House Martin all feeding on the insects disturbed by the cows.

As we walked back there was another Cetti's singing. No birds at all on the pond, though a Kestrel was hunting over the back of Fishtail.

The overcast conditions were not conducive to photography and the wind made holding even binoculars difficult! CR