Fourteen of us made the trek across to Martin Down for a springtime walk on the chalk grasslands and amongst the scrub. It was a glorious day with a fresh breeze. We saw the first of several Yellowhammers as we gathered at the Sillen Lane Car Park. As we set off Chris found a mating pair of Bloody-nosed Beetles, which became the first of many subjects for those with cameras.

Martin Down probably the most reliable place in Hampshire to see the declining Turtle Dove, a species that has suffered from hunting in the Mediterranean region on migration and from the effects of intensive agriculture in Europe during the breeding season. It wasn’t long before we heard the first of three ‘purring’ males. Some of the party had great views of one through Chris’s telescope while the rest saw another song-flighting over a different area of bushes and trees.

During the steady climb up to Bokerley Bank a number of interesting plants were found including Horseshoe and Kidney Vetches, Early Purple and Chalk Fragrant Orchids and masses of Cowslips. Before long the first of several Dingy Skippers were encountered. On top of the bank we had a late biscuit round which evolved into picnic time! Nearby were more Early Purple Orchids, but unfortunately the Greater Butterfly Orchids were still in bud.

The bank and the surrounding area produced other floral goodies with Pasqueflower, Field Fleawort and Burnt Orchid being the highlights and with the warmth of the day more and more butterflies appeared bringing the day total to 11 species. Several female Brimstones were seen egg-laying and their tiny lime-green eggs found!

We strolled leisurely back to the cars to the sound of singing Skylarks and a ‘cuckoo-ing’ Cuckoo, but it was a singing male Corn Bunting that was the afternoon’s avian highlight and a clump of Star of Bethlehem flowers the floral one.

Thanks to Chris Robinson, Duncan Wright and Richard Coomber for the use of their images. Copyright remains with the photographers.

Rosie and the Goshawks 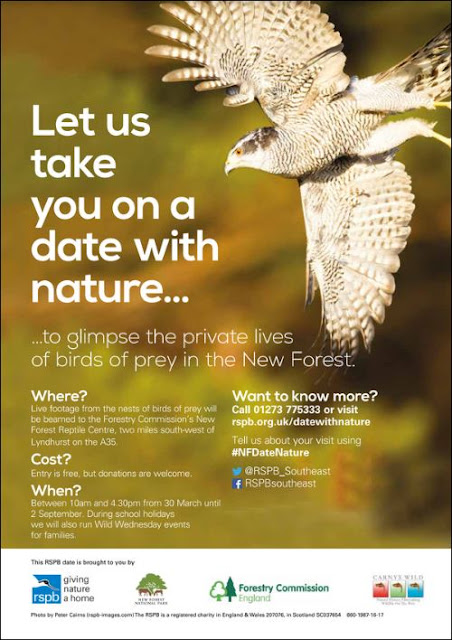 Some members know Rosie Bowman, either through conservation volunteering or on our walks, when she worked for Birds Aware Solent. Now her love of our area and the New Forest has taken her inland to become the RSPB's staff member at the Date With Nature project at the Reptile Centre near Lyndhurst. There she, and a keen team of volunteers, run the project which aims to show live footage from a Goshawk's nest (somewhere in the New Forest) over the coming weeks as well as showing other aspects of wildlife in the Forest.

Goshawks are early breeders and the chosen nest already has chicks - see https://carnyxlive.co.uk/jwplayer/streams/newforest720ssl.html. However the image is seen better at the Reptile Centre than over the internet.


A record 23 members joined Angela for a Bluebell walk in Roydon Woods. The woods were looking lovely, fresh new green leaves, mainly of Beech, Oak and Hazel, were coming out every-where in different shades of green.

Some seedling trees attracted our attention at the end of the walk. We identified these as Wild Service Trees, an unusual native tree that can be found locally in the Forest. A slime mould Fuligo septica was also discovered which is called 'Flowers of Tan' due to its regular appearance on the bark used in tanning. (AM)