16 members joined leader Geoff on one of the hottest mornings of the year for this rather misnamed field meeting as, from the car park, we immediately crossed the road to explore Fawley Inclosure.

Within a few yards, all 3 heathers, Bell Heather, Cross-leaved Heath and Ling were attracting many Silver-studded Blue butterflies both male and female and several mating pairs were spotted. Less numerous were Gatekeeper, Grayling, Large White and Small Heath with a Silver Y moth, Golden-ringed Dragonfly and innumerable grasshoppers also seen.

Carrion Crows cruised overhead and a Woodlark posed atop the gorse before flying off. Amongst the heathers, Lousewort, Tormentil, Heath Milkwort, Self-heal and Coral-necklace were identified.

Moving on, we passed the site of a scheduled ancient monument known as a Bowl Barrow but were unable to pinpoint its exact location. A Sparrowhawk flew above the trees and Goldfinches flitted around. As we moved into the conifer plantation a Chaffinch was spotted. By this time somewhat spread out, the botanists identified Sheep Sorrell, Wood Sage and Lady Fern.

Around the edge of an area of mire were some good specimens of Round-leaved and Oblong-leaved Sundew along with Bog Asphodel, White Beak-sedge, Cotton Grass and Pale Butterwort. Kestrel and Buzzard were also spotted.

Cutting back through the plantation, we risked life and limb on a brief detour across the busy A326 Fawley Road to Forest Front Nature Reserve for the disabled. By the pond, much welcome shade and seating provided an ideal location for an overdue refreshment break.

An Emperor Dragonfly patrolled around the fine stand of Reedmace but although movement could be seen, no birds or fish were identified.  White Water-lily flowered in the pond and on a short walk around the reserve a good variety of plants were evident, namely Tufted Vetch, Rosebay Willowherb, Lesser Stitchwort, Common Knapweed, Hogweed, Ladies’ Bedstraw and Corky-fruited Water Dropwort. Small Copper, Skipper and Speckled Wood butterflies and a Blackcap were also seen. Richard collected a small moth called Garden Grass Veneer (Chrysoteuchia culmella) and Maureen picked up a striking blue Nettle Weevil.

Returning to the enclosure, we moved on to Flash Pond where Coloured Water-lily flowered alongside Lesser Spearwort, Marsh St. John’s Wort and Water-plantain. Blue damselflies hovered around and Small Red amselflies were mating.
The return walk crossed open heathland where, in the distance above the conifers, a Buzzard, two Kestrels and a Swift were seen. Meadow Pipits and Stonechats, both adult and juvenile, were busy in the gorse and a Little Egret was fishing in what remained of one of the larger ponds.
Some small specimens of Lesser Water-plantain were clinging on in a dried-up puddle and we also saw Chamomile in flower before crossing back to the car park.
GN
Photos:  © Chris Robinson, Richard Coomber
GPX 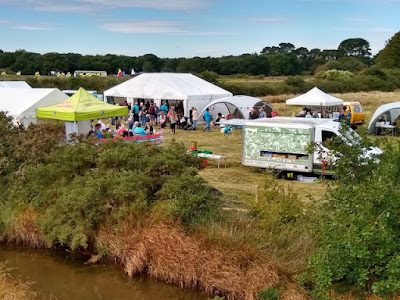 Lymington & District Naturalists' Society are supporting this event again this year. We have marquee space reserved for displays and information about the society and a team of committee members attending the stand.

Our next 'General Interest' field meeting for members is next Thursday.  We will be starting from Dibden Inclosure Car Park at 10am.

On a bright morning this early July our large group (23) of enthusiastic Naturalists assembled and looked out on the busy plain full of cattle and ponies. The grass plain has developed a sparkling array of wild flowers since its re-seeding after the war when it had been ploughed and cultivated for arable farming to support the war effort.  We walked along the southern edge trying to avoid the inquisitive ponies and pay attention to what was at our feet.
We found the lemon-yellow flowers of Mouse-ear Hawkweed among the richer yellow of the other more abundant Hawkbits, Tormentil and Common Bird’s-foot-trefoil.
Mixed in were the purples of Selfheal, patches of Wild Thyme and the occasional specimen of Lousewort, the lovely pink of Common Centaury and blue of Common Milkwort, not to mention a host of other species like stars in the sky.
On reaching swathes of heather, we found a few beautiful spikes of Lesser Butterfly Orchid, a delicate and intricate pale flower, and were serenaded by Skylark.
Descending from the plain we made our way down toward a boggy area, finding many examples of Heath Spotted Orchid along the way and the occasional delicate spike of Slender St John’s-wort.
The most abundant heather was Ling (mostly not in flower just yet), though the rich purple flower of Bell Heather stood out amongst it and occasional patches of the pink and paler green of Cross-leaved Heath in the wetter areas.
We found many interesting marsh plants including the yellow spikes of Bog Asphodel, mats of Marsh St-John’s-wort and Bog Pimpernel. A few dancing butterflies emerged in the heather, mostly the delicate Silver Studded Blue and the odd Small Heath.

We paused by a stream, hearing the busy Stonechats (but not seeing) and were lucky to see a female Common Lizard basking in the sun on a stump. Thanks to Chris for spotting.

On moving off we saw glimpses of Linnet and then a male Stonechat displaying proudly at the top of a Gorse bush.

Returning through the valley Tina spotted a small group of Fallow Deer on the opposite bank headed by an almost white male already with a fine set of antlers developing. From one glorious sight to another on a different scale, eyes turned down for a rich display of  Sundew and the rarer Marsh Club Moss.

Another brief foray across the plain and our rather meandering walking bus returned from whence we came.  A thank you to Glynis for being the “beater” at the rear!

Our next members’ Field Meeting will be a varied walk, starting from Wilverley Plain carpark.  This will be a fairly hilly walk on lawn, open heathland and some bog.  There are many flowering plants to be seen at the moment as well as butterflies, damselflies and dragonflies - weather permitting.