Catherine Chatters from Hampshire and Isle of Wight Wildlife Trust, who many of us know, has warned us and asked us to watch out for Asian Hornets as one was reported by a member of the public in New Alresford and a nest was found there on Sunday 23 September 2018 by Inspectors from the National Bee Unit. The nest was eradicated on Monday and the Inspectors are currently trying to find any other nests which might be present in the Alresford area.

On Monday 24 September Asian Hornets were reported near Beaulieu. The Inspectors are trying to locate the nest. The rapid response at New Alresford highlights the importance of public awareness of this species and the Great Britain Non-Native Species Secretariat is encouraging people to be vigilant and to report sightings of the Asian Hornet.

They can be aggressive as this report from France shows:

A 57-year-old man from the Calvados departent of Normandy died recently after being attacked by the insects. The man was pronounced dead at the scene while another woman was treated in hospital after being stung several times. The death is just the latest linked to the insects that were accidentally introduced to France back in 2004 and which are responsible for decimating local bee populations.
In August a farmer from the far north of France was stung by an Asian hornet as he got into his car. Minutes later he fell unconscious while driving and crashed his car into a post. He died from a severe anaphylactic shock --  in other words, he suffered a deadly allergic reaction to the sting.
And a woman died in the Manche department of Normandy after suffering a similar fatal reaction to being stung by Asian hornets in her garden.
There have been other fatalities too, including a Dutch tourist who died at a campsite in the Drôme due to a heart attack after being stung.


If an Asian Hornet is seen it can be reported as soon as possible via an online form, the Hornet Watch app; or by sending a picture to the alert email address: alertnonnative@ceh.ac.uk 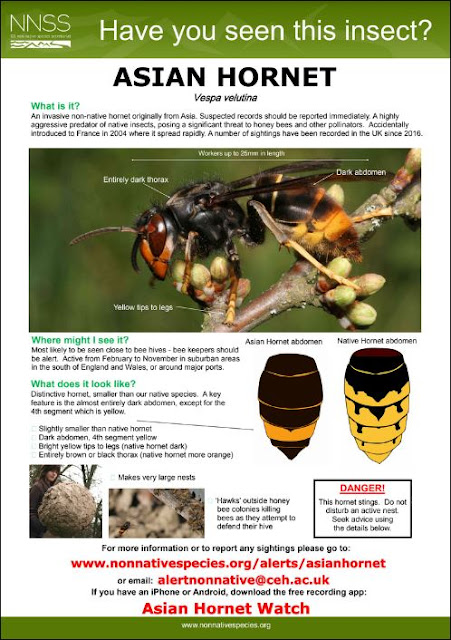 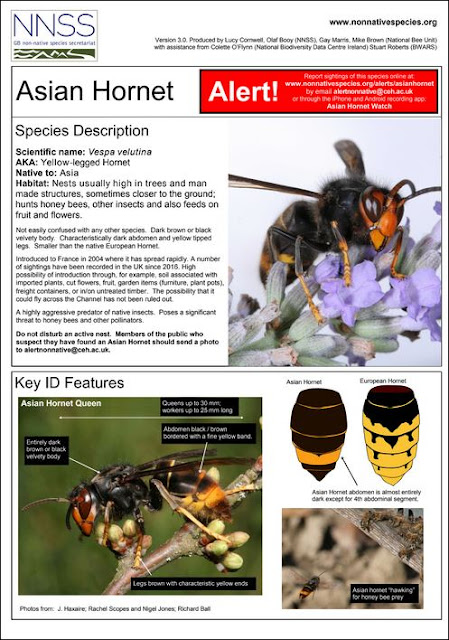 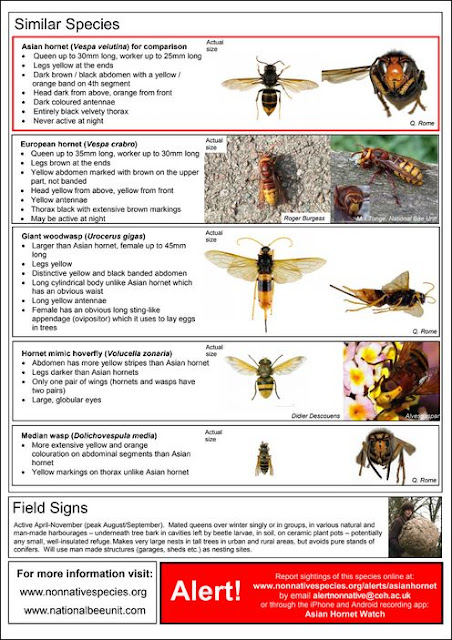 Our Winter Programme of talks kicks off on Tuesday 25th September with the Graham Giddens talk:

Inside a Reed Bed - The Secret Lives of Wetland Birds

Graham has over the years shown us the wide selection of bird life and bird habitats which we are fortunate enough to have near to us. This is a new presentation.

The indoor meetings are held at The Lymington Centre (McLellan Hall) on the second and fourth Tuesday of the month and commence at 7.15pm. Visitors are always welcome for a small charge (adults £5, juniors £1).


20 members on a lovely sunny morning set off with Pam in a northerly direction to Wort’s Gutter. Following the left hand track, which is a damp grassy area many species of wild flower were seen: Marsh Ragwort, Water Mint, Devil's-bit Scabious, Sneezewort, Common Fleabane, Common Centaury, Tormentil, Knapweed, Lesser Spearwort, Marsh Thistle, Creeping Cinquefoil, Cat’s- ear and Ling. Hard and Male Fern were seen along the banks of the gutter, while small shoals of Minnows darted around in the water. A very obliging juvenile male Stonechat posed for the photographers in the group, while the occasional Swallow and a few House Martins passed overhead and, there were plenty of Field Mushrooms along the way.

Moving away from the gutter and turning onto the uphill track leading to Moon Hill a mixed flock of small birds kept us busy as they flitted in and out of the trees, these were Blue Tit, Coal Tit, Great Tit and Chiffchaff. This area is more open and dry and with stands of conifers. Turning onto the cycle track where the ground had been disturbed by the Forestry Commission, we came across a very unusual plant which Richard immediately identified as a Thorn Apple. This plant originates from South America and is thought to have come over as a contaminate of birdseed. The whole plant is poisonous and, in this country is occasionally found in gardens, along roadsides and on wasteland. Its appearance is weather dependant as it prefers a warmer climate than ours.

The final part of the walk took us through a beautiful Beech and Oak woodland. Here we found False Chanterelle, Sulphur Tuft and excellent specimens of Grey Spotted Amanita. Then following the track down to the ford we came across areas of Marsh Pennywort, some Coral- necklace and a solitary Common Frog. When crossing the bridge a Grey Wagtail was seen as we finally walked back to the carpark.