Everywhere seems to be ablaze with yellow and gold at the moment.  We have gorse blooming on the heathland, primroses in the hedgerows, lesser celandine and marsh marigolds in damp areas and of course the ubiquitous cultivated daffodil.

Another yellow flower to look out for at this time of year is Coltsfoot (Tussilago farfara), one of the fleabanes. It is a common plant throughout the British Isles and can be found on hard, bare places - waste ground, roadsides, gravel, dunes, low sea cliffs or river banks.  This particular, rather battered looking specimen was recently photographed on the exposed shingle of Hurst Spit.  Good clumps can be seen on the left hand verge of the road to Efford Recycling Tip. 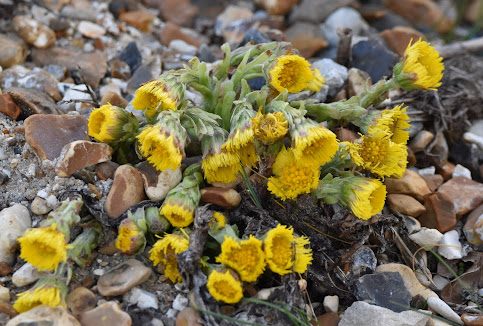 Coltsfoot is a low-lying plant which flowers from February to April.  For the moment, only the flowers can be seen - the broadly heart shaped leaves, which are downy underneath, will appear much later. 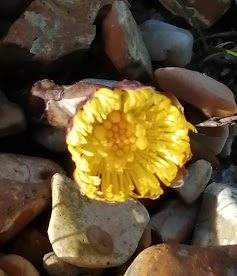 The stems of Coltsfoot are stout and have many overlapping fleshy scales which can be purplish and woolly.  Like the dandelion it has both disc and ray florets.

Coltsfoot has a stout underground rhizome, so benefits from a store of food laid down the previous summer. This enables it to appear early and in harsh, inhospitable places.

Coltsfoot was valued in the past as a medicinal plant, useful for treating coughs and other chest complaints.  Its common name comes, perhaps, from the leaf shape.