Cherry Plum and Blackthorn are both flowering at the moment, but the white bushes/shrubs we see around us are often dismissed as being merely Blackthorn. 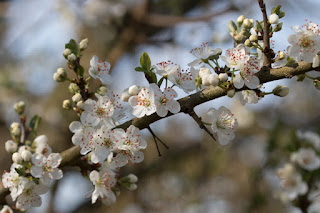 Cherry Plum is the first to flower and the leaves appear at the beginning of flowering or soon after.  Its flowers are slightly larger than those of Blackthorn and the stamens are shorter than the petals. It does not have spines. 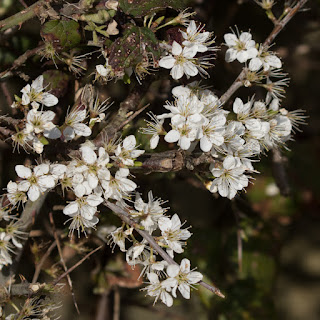 Blackthorn starts flowering 2-3 weeks later and its twigs are more densely packed with its smaller white flowers.  The stamens are longer than the petals giving a flowering spray a slightly fuzzy appearance.  The branches also have spines, hence the name.