We set out in the car in absolutely torrential rain, and right on cue, it cleared, and the sun came out when we arrived in the car park. We set off down the track which didn’t seem too muddy at first and immediately were accompanied by a lovely chorus of bird song. We spotted Redwing, Chaffinch, Marsh Tit and Great Spotted Woodpecker. We also started to notice little bits of red on the ground, mixed among the leaf litter. On closer inspection we saw that they were acorns that had split open and started to germinate.

Their flesh was turning a rich magenta red. (Having never noticed this before we researched on getting home but could find nothing to explain this except to report that acorns are rich in tannins which may account for the colour. We wonder if the germination process causes them to be released like this and they become oxidised on exposure to the air?) Then we started to find the going difficult with deep mud. Stopping to look with binoculars or to take photos resulted in being glued to the ground. We persisted and found Nuthatch, Treecreeper and more and more mud and eventually had to abandon the route we were intending, turn around and retrace our steps. On the way back we found even more mud. Or, to be more precise, Glynis found more mud. Just as I was about to say “I wouldn’t step there”, she stepped there and went down into the liquid mud up to her knees. 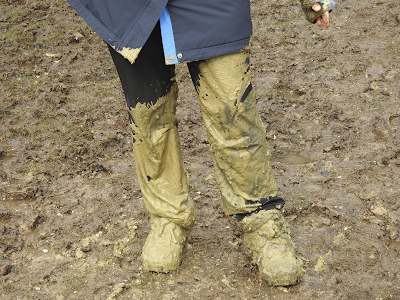 I pulled her out, took the photo that had to be taken and made our way back. A final reward for our efforts was seeing a Firescrest flitting in the holly shortly before we got back to the car. Then we managed to bring a very muddy Lymnater back home to be hosed off in the garden! Just to confirm that this walk is not advised at present, not least because of the conditions but also because of newly fallen trees over the path in several places. Glynis and Robert Payne
Newer Post Older Post Home