I was lucky enough to see these bees in our garden a couple of days ago and was intrigued as to what they were. 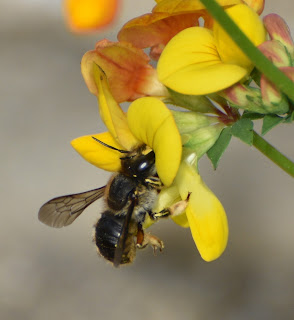 The Wool-carder is a bee of the southern part of Britain, which nests in aerial cavities that other insects have created.  The name comes from the female’s method of collecting nesting materials.  She ‘cards’ fibres from plant stems (reminiscent of carding wool to separate the fibres). 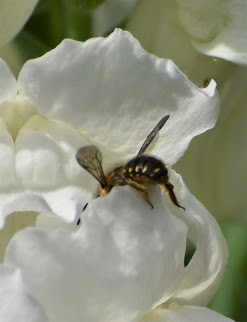 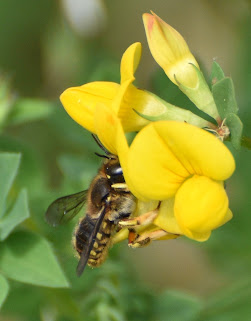 These solitary bees have a single generation and may be seen flying from June to August.  The sexes are similar, though the males are larger and fiercely protect their territory.  They are easy to identify by the yellow markings along their abdomen and on their legs and faces.  They don’t have a sting as such but the male has sharp spines on its rear-end where the sting would be.

They are great pollinators favouring a number of plants with tubular flowers (such as the Mint family) or those with restricted access (such as the vetches and toadflaxes).