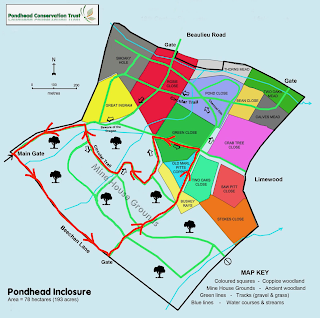 Pondhead Inclosure is designated as an SSSI and is like no other area of woodland in the New Forest. It has not been grazed by ponies or cattle for several centuries, resulting in a rich variety of flora, butterflies and birds found in few other places locally.

Pondhead was famous amongst Victorian collectors for its profusion of butterflies, but sadly this also led to their decline with specialist dealers set up in Lyndhurst high street to cater for the demand.  Today, as a result of ongoing restoration work, Pondhead Inclosure contains the largest area of hazel coppicing on the Crown land of the New Forest.  This and the reinstatement and creation of other suitable habitats within the inclosure are helping address the general decline in UK butterfly numbers (1, 2).

During a very dry spell in July 2018 a large number of butterflies were seen here when Richard Coomber and Adrian Butterworth led a field meeting and in this week last year the same area held White Admiral and Pearl-bordered Fritillary as well as large numbers of bees, hoverflies and hornets.  Evidently, past performance may not be indicative of future results!

On a still, overcast day, 17 members and leader started the short walk at the entrance to Beechen Lane. There was a notable absence of butterflies but our botanical experts were able to identify numerous rushes, sedge, grasses and other plant species and we spent 45 minutes walking up the lane to the gate into the inclosure.  Species identified included Ragged Robin, Dog Rose, Cuckoo Flower, Foxglove, Heath Speedwell, Bog Pimpernel, Oval and Star Sedge, Marsh Bedstraw, Lesser Spearwort, Creeping Forget-me-not, Tormentil, Velvet Bent, Crested Dogstail, Toad Rush, Bulbous Rush, and Common Cow-wheat. The latter is a hemi-parasitic plant that enjoys a symbiotic relationship with Wood Ants, which assist in seed dispersal (3).

The pink fruiting bodies of a slime mould were found on some decaying wood and identified as Wolf's Milk - Lycogala terrestre.  A birch polypore was also found nearby in the damp environment.

Meadow Brown and Red Admiral butterfly made brief appearances and a Stock Dove perched in a dead tree opposite the gate.

Entering Pondhead Inclosure we found more Cow-wheat along with Greater Stitchwort, Pendulous Sedge and Greater Birdsfoot Trefoil, not yet in flower.

A couple of Golden Ringed Dragonfly patrolled the tops of a large patch of bramble and paused briefly for photographs.  A Pill Woodlouse on the path rolled itself into a tight ball and was gently moved to safety!  Along the margins, Wood Sedge and Remote Sedge were found, together with Silverweed.

As we stopped at the crossroads for a break. more species of plants were found: Marsh Ragwort, Hedge Woundwort, Zigzag Clover, Herb Robert and Wood Avens and several Lesser Burdock, heavily infested with blackfly.

A hoverfly, identified as Xylota sylvarum, a species associated with old woodland, was  seen (4).

More insect life amongst the foliage included a Black-headed Cardinal beetle, a Black-and-yellow Longhorn beetle, and a male Common Scorpion fly - Panorpa communis - the claspers at the end of its tail resemble a scorpion tail but are used for mating purposes.

Tutsan, Yellow Pimpernel and Wood Speedwell were seen beside the path as we moved on and a Jay paused briefly.  Turning back into the woods we returned towards our cars along part of the circular walk.  Blackcap and Song Thrush sang in the trees and a dead, but seemingly undamaged shrew, was found lying on the path.  Lady Fern, Slender St John’s Wort and Germander Speedwell grew in the margin.

Despite the lack of butterflies, and thanks to the collective expertise of the members, we were still able to identify a substantial number of plants and insects.  Hopefully more sunshine and warm weather will bring the blackberry into full flower and a return visit in a couple of weeks will be more rewarding.  RS

1/ A detailed history of Pondhead by Derek Tippetts can be found here:

2/ Details of the work done by the Pondhead conservation trust and several detailed maps can be found and downloaded here: