Having arrived via Normandy Marsh and not seeing much of interest it was decided to concentrate on Oxey Marsh, particularly as it was still some 2 hours before LW. It was a bright, sunny morning (if somewhat chilly) with thankfully light winds. The anticlockwise route took in Eight Acre Pond, Salterns Lagoon, the bridge across Moses Dock, and a circuit of Oxey Marsh via the sea wall and Oxey Lagoon.

HCC acquired Normandy Farm at auction in May 1973, followed by Salterns and Eight Acre Pond in the autumn of that year. Pennington/Oxey Marshes were acquired in the late 1970s to avert the threat posed to a large-scale grazing marsh by commercial gravel extraction.

Some highlights of the walk: a sizeable group of Little Grebe (affectionately also known as "Dabchick") on Eight Acre Pond, often diving under with a little leap and reappearing like a cork. On Salterns Lagoon male and female Shovelers dabbled in tight, circular flocks for seeds and invertebrates. Inside their distinctive bill is a series of sieves and bristles which holds onto the food it collects by filter feeding, while letting the water drain out. To reach slightly deeper food they would up-end when the long, pointed wingtips became especially conspicuous. A Greenshank flew in. 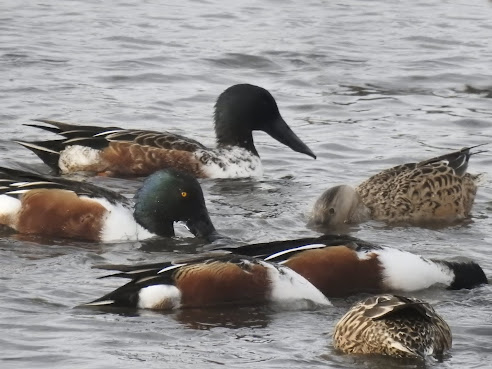 On Oxey Marsh a Raven had found a tasty morsel, possibly a rabbit and on reaching the sea wall (and following a break) what might have been a Common Sandpiper was in fact a solitary Dunlin and 3 Spotted Redshank on Oxey Lagoon whilst offshore 2 Slavonian Grebes were in the company of a Great-crested Grebe.
The falling tide had, by this time, exposed the mud of Oxey Lake and Four Acre Pond, where many birds were taking advantage of this feeding opportunity: Dark-bellied Brent Goose, Shelduck, Oystercatcher, Ringed Plover, Redshank, Grey Plover, Dunlin, Black-tailed Godwit, Turnstone and Curlew. These besides the usual suspects seen en route: Mute Swan, Canada Goose, Wigeon, Mallard, Pintail, Teal, Cormorant, Little Egret, Grey Heron, Coot, Lapwing, various Gulls, Carrion Crow, Rook and Magpie.

Some LymNats were lucky enough to see a Snipe in flight, a Kingfisher and a Water Rail. Lasting just over 2 hours the walk ended back at Maiden Lane. Who knows what rarities might have been waiting on Normandy? BM 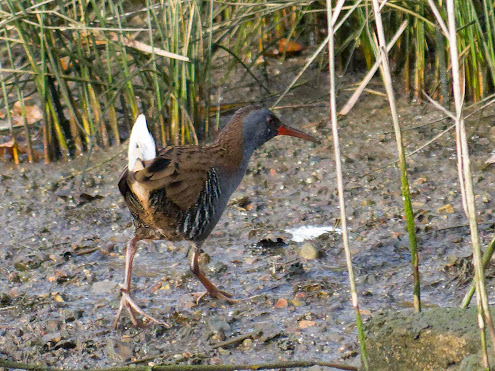 Thanks to our photographers for and excellent selection of images from the walk and incidentally nothing unusual was reported from Normandy. Ed.