The big excitement this month has been the Wilson’s phalarope on Keyhaven Marsh, a very obliging bird showing well for all and sundry. This is a bird of the Western USA in Summer and Argentina in Winter. This puzzled me, so I started to search the literature to see how this bird could end up here! 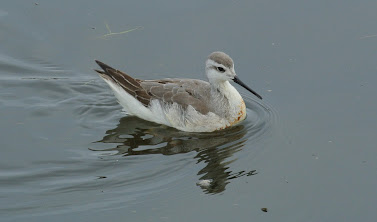 Unlike its relatives the Grey (Red) and Red-necked phalaropes it is not a bird of the ocean. It nests around lakes and lacks the highly developed salt-gland of the other two species. However, it is a bird prone to ‘reverse migration’ (genetically programmed dispersal) and has been found in Australia and southern Africa. One was found dead on Alexander Island in Antarctica, making it the most southerly wader in the world. There is also a move into eastern Canada where most of the European vagrants seem to originate from. It first turned up in the UK in 1954 and has been a regular, if scarce, visitor ever since. This one appears to be the seventh recorded in Hampshire.  The bird at Keyhaven is not a juvenile, it is an adult bird, suggesting that it got across the Atlantic a year or two ago and is now commuting North and South between West Africa and Scandinavia. This has been documented with other waders, so why not?  But why here, on a pocket-handkerchief of a marsh?  Well I think the answer lies in the other local migrants. 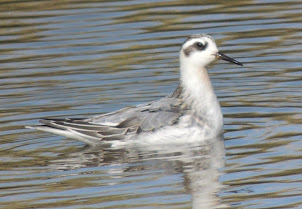 The Grey phalarope is known to have favourite stop-offs on its migration routes. This is the third year that I have seen them at Keyhaven so it is not too much of a stretch to suggest that these birds have been here before and could well return next year. The Wilson’s getting here is probably down to it being with the Greys.

Also, you may not have noticed that a Bar-tailed godwit has just broken the record for the longest non-stop migration ever recorded. It left south-west Alaska on the 16th September and arrived in New Zealand 11 days later! 7,500 miles, having flown at speeds up to 55mph. The bird in question is known as 4BBRW (the colour coding of its rings) and carried a 5mg satellite tag harnessed to its lower back. Amazing.