On a chilly, but calm and dry morning, 19 of us met up at Keyhaven for the first LymNats walk of the year. We started overlooking the Keyhaven reedbeds where two Marsh Harriers were resting on the Blackthorn hedge - a female and an immature male, and some saw a Green Woodpecker fly over. Passing the MCV Bird Observatory overlooking The Pans gave those who hadn’t seen this enterprising project the chance to have a peep inside the locked gate.

As we walked round the harbour westwards it soon became apparent that on the outward leg the hightide would limit the number of shorebirds seen, so after Brian’s Red-breasted Merganser we turned to a bit of out of season botanising – Wild Carrot, Red Clover and Sea Mayweed were found and perhaps slightly out of sync with the time of year. Gorse however was to be expected for the age-old adage says that ‘kissing’s out of fashion when Gorse is out of bloom’.

As we neared the point where the seawall meets the western end of Saltgrass Lane several Reed Buntings posed along the hedgerow and a distant Peregrine was seen with the aid of the telescopes out on the saltings. Towards Cut Bridge Rock Pipits and Turnstones fed along the edge of the road and in the field inland were Meadow Pipits and Pied Wagtails, but unfortunately we failed to locate the Water Pipit that had been with them yesterday. A male Stonechat is always a nice bird to see.

From the top of the shingle above Cut Bridge we looked out over the calm but empty sea. A good vantage point, albeit a chilly one. Pressing on towards Sturt up to 20 juvenile Brent Geese were in the flock of some 500 birds grazing in the field across the stream. A great improvement in the species’ breeding success last summer over the previous one.

Heading back to Keyhaven gave us the opportunity to warm up with a brisker walk and to see a few additional birds as Dunlin and Grey Plover took advantage of the mudflats exposed by the now falling tide.

It was a satisfying walk with some 45 bird species being noted. A special thanks to Chris, Richard S and Tina for the use of their photos   RC 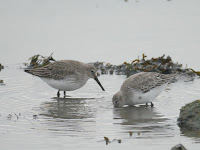 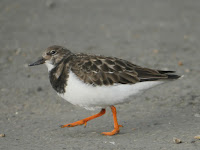