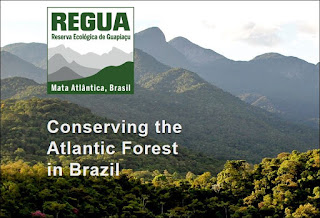 REGUA is the acronym for Reserva Ecológica de Guapiaçu and the subject of a recent talk to Lymington & District Naturalists’ Society by local dragonfly expert, Peter Allen. Although dragonflies did feature amongst the superb photographs, the talk covered two wildlife holiday visits to REGUA undertaken by Peter and his wife Cindy to an area of Brazil’s endangered Atlantic Rain Forest just 100 kilometres north of the bustling and expanding city of Rio de Janiero.

After a brief stopover in Rio characterised by rain and low cloud which obscured the famous Sugar Loaf Mountain and the magnificent statue of Christ the Redeemer, REGUA’s minibus collected them and during the two hour journey north the driver pointed out some of the local wildlife. The comfortable lodge that provides full-board accommodation at the reserve was surrounded by a garden that was home to colourful tropical birds attracted to bird-tables laden with fruit. It also brought in a troupe of tiny monkeys, White-tufted Marmoset. Within the lodge a well-appointed library helped visiting guests and naturalists to identify many of the species seen in the area. Elsewhere there was an education centre for school visits and research facilities for visiting scientists.

We were told how REGUA had been set-up by the owner, Nicholas Locke, from the estate that had been in his family’s ownership for over 100 years. It covers an area of about 10,000 hectares and is now run as a charitable trust. Over the years much of Brazil’s Atlantic Rain Forest has been logged and the once forested hills and valleys turned over to cultivation and pasture for cattle, resulting in fragmented remnants of the original habitat where many endemic birds and other forms of wildlife occur. Nicholas Locke’s vision was to rewild or restore the area to its original habitat thus reconnecting some of those fragments.

Through a few archive images as well as Peter Allen’s excellent photographs and commentary we learned how the area had been transformed from farmland to a wilderness traversed by trails that allow visitors to enjoy the natural riches that have colonised the area over the last twenty years or so. Seeds of native trees are collected and reared in the reserve’s nursery before being planted to restore the natural habitat. From just a few hundred plants each year they are now planting in the order of 10,000 seedlings annually that grow rapidly in the tropical conditions.  A favourite walk of the Allens was the Wetland Trail around a series of recently created wetlands and lakes that are now home to the world’s largest rodent, the Capybara, which looks like an overgrown guinea pig, and are also home to the Blunt-nosed Cayman, a formidable South American crocodile that might prey on the Capybara. Various herons and egrets as well as other waterbirds have moved in and use the wetlands as feeding areas and the surrounding trees and forest for breeding and roosting.

Peter showed us images of a great variety of insects that included many colourful butterflies and dragonflies. To date nearly 400 species of butterfly, over 200 species of dragonfly, nearly 100 species of hawk-moths, about 80 species of mammal and some 400 species of birds have been identified on the property. Some were local in distribution, whilst others such as the White Peacock butterfly range across the neo-tropics to the Caribbean and the southern United States. The variety of butterflies shown was matched by the diversity of the dragonflies and we were surprised to learn that some species eat their own kind rather than just any small flying insect. We also saw a range of birds and plants from around the wetlands and along forest trails visited with one of the reserve’s naturalist guides. It was along those trails that columns of leaf-cutting ants were watched and photographed.

Back in the garden a white ‘moth’ wall was illuminated by powerful lamps overnight and Peter would rise before dawn to see and photograph the amazing variety of species attracted by the light. The garden also enabled some close-up shots of hummingbirds including the smart Black Jacobin at a feeder and some memorable ones of a Glittering-throated Emerald enjoying a shower in the rain. Peter explained that hummingbirds don’t have a preen gland like most birds, so rely on rain to keep clean. It is a rain forest after all!

The talk on such a positive conservation success story was much appreciated by the audience.
Newer Post Older Post Home